When walking around the city of Barcelona you should notice the variety of flags on  government buildings and hung from private balconies. Within the last several months the number and variety of these flags have grown throughout the city as a medium for citizens to show their political allegiance.  When taking people on walking tours, I always like to introduce these flags as it always opens a dialogue and allows for an explanation of both the history and current events of the city.  I think it’s important to understand these symbols on a visit to Barcelona to better understand Barcelona’s past and present.  Over a series of posts Patrick Guide Barcelona presents Fun with Flags a description of the flags you will find around the city of Barcelona for you to enjoy.

Maybe you recognize the name of the post from the Big Bang’s “fun and informative”, Dr. Sheldon Cooper presents Fun with Flags. Like Sheldon, maybe I will make it up to a couple hundred followers…

The Spanish flag is going to be atop all of the government and official buildings, but will be less seen on the balconies of the people’s apartments.  Directly after the 2017 referendum, more Spanish flags began to pop up around the city as a response to the vote and as a call for the unity of the country, but many of those have been taken down since.  The Spanish flag is very recognizable from a distance with its two red banners sandwiching the central yellow banner, yet the insignia in the center is not always as known.

The current design is the product of many changes of the centuries, with the final product finally decided as recently as 1981.  With the dynastic changes, intermitten Republics and dictators that have all left their mark on the country’s flag, the Spanish flag has a long history.

The current colors of the flag are owed to Antonio Valdés y Fernández who drew up 12 different options for a new more distinctive flag from other countries upon the urging of Charles III in 1785.  Originally made for the Navy, the idea was to change the white flag used at the time due to the fact that many nations were using white backgrounds.  It was not until 1843 and the decision made by Isabel II that flag was officially adopted from the Spanish nation as a whole.  Despite the changes we will see in other posts, the colors and design have stuck until today. It was not until 1908 that is became mandatory to fly the flag on government buildings.

The current design contains one yellow bar in the center that is twice the size of the two red bars that create a border.  The crest itself has changed over the years as different regions were added under the crown.  In total 5 different kingdoms are represented.  The top two quadrants represent the union of the crown os Castile (the castle to the left) and León (the lion to the right), while the bottom two have the old flag of the Aragon (the four red bars we will see later) to the left, with the old Kingdom of Navarre represented to the right.  At the bottom you can find the Kingdom of Granada represented with a pomegranate (actually called a granada in Spanish). 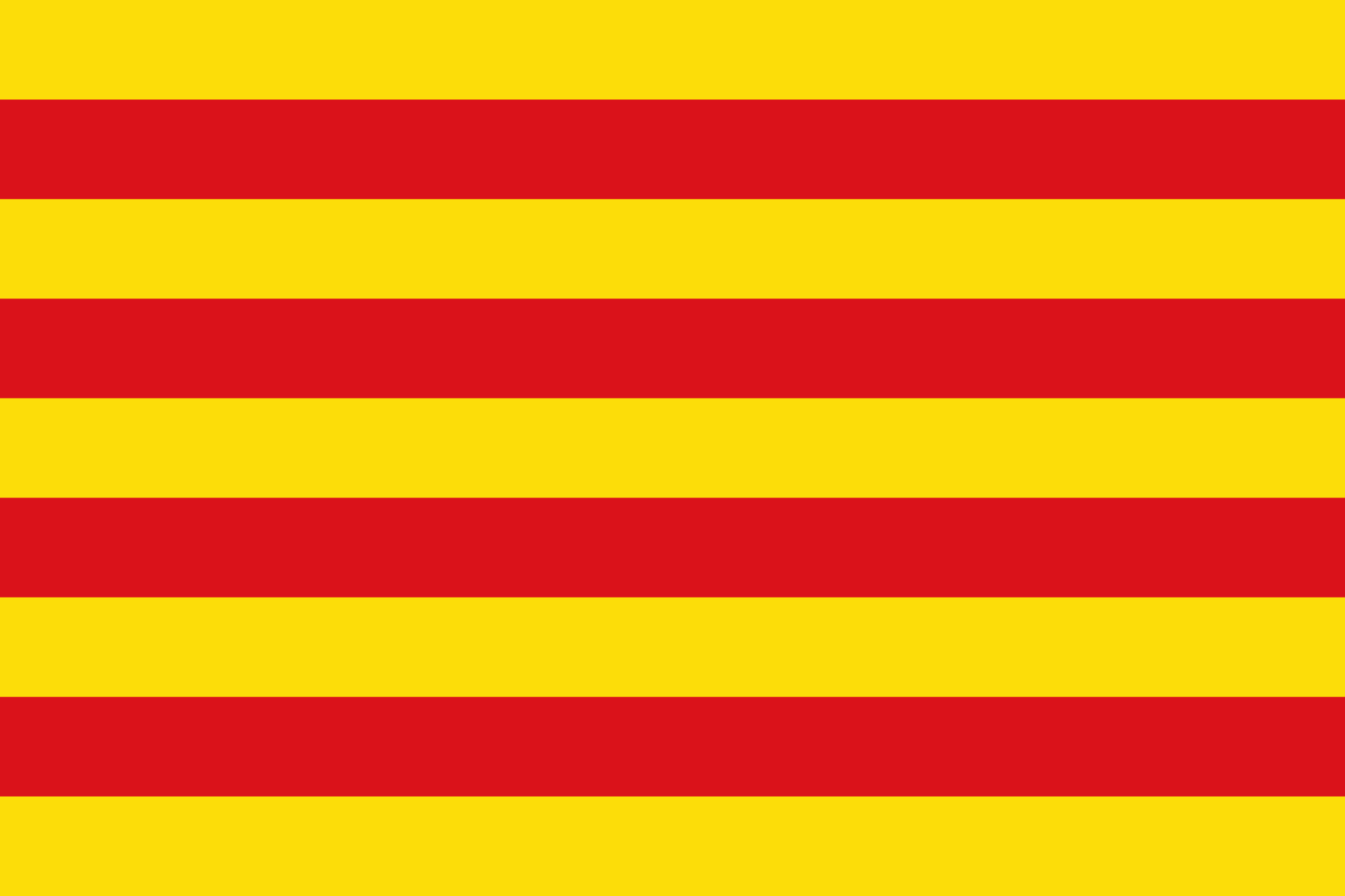 The flag you will most commonly see around the city will be the flag of Catalunya known as the Senyera (the sign) or els 4 Barres, for the four red bars across the backdrop of gold. This is the flag for just the region of Catalunya and gives us one of the best legends throughout the area.  The four red stripes come from Wilfred the Hairy. I’ll let that name sink in…

Wilfred is known by many as the Father of Catalunya.  It is said, that his name might not be all that representitve of his actual stature and that a translation error, created the myth.  Pilum, in old Latin means lance, and Wilfred being a greta warrios recieved this nickname.  When the Latin Pilum was confused with the Catalan Pelos (Hairy), the legend was born,.  Either way, Wilfred became the first count in the area that was known as the Marca Hispanica (Spanish Territories of the Frankish Kings) to stop paying tribute to their leader.  He is infamous for the founding of many different monasteries and religious centers through out Catalunya, such as the monastery of Ripoll.  But it is while he was still fighting for those kings, that the story behind the flag came into being.

Now this legend came into being sometime in the 15th or 16th century and considering Wilfred the Hairy was alive in the 9th, the legend had quite sometime to build and grow.  It is said that Wilfred was struck down during battle and received a wound in his side.  Upon hearing this, the Frankish King, Charles the Bald (yes), came to Wilfred’s side and asked what he could do to show his gratitude for all Wilfred had done.  Wilfred replied that his golden shield lacked an emblem, to which Charles took his four fingers and placed them in Wilfred’s wound, took the blood and drew the four famous bars across that golden shield.

The exact origins seem to be under quite a great deal of debate.  After the marriage of the Ramon Berenguer IV, Count of Barcelona, to the Princess Petronilla of Aragon in 1137 and the creation of the Crown of Aragon, both Catlaunya and Aragon were united.  Possible origins if the flag could date back to the Counts of Barcelona, specifically Ramon Berenguer II in 11th century, while others claim the Aragonese orgins coming from Alfonso II’s shield in the 12th century.

The expansion of the Crown under Jaume I brought Valencia, the Balearic Islands, and later parts of Italy under the same rule.  Today these places all have the same pattern of the Senyera within their own flags, in fact, Alghero, a city in Sardinia, has the Senyera as its flag and some people still speak Catalan.  The current version of the Catalan flag did not become official until the drafting of the Spanish Constitution in 1978, while the other regions pertaining to the old Crown of Aragon, use slightly modified versions.